From beadwork to potjie, everything is in the week of South African culture

Duniya dances to the rhythm of West African culture

Zenani Nosizwe Dlamini, South African Ambassador to Korea, left, and Jung Jang-seon, Mayor of Pyeongtaek, examine photos of South African pilots taken during the Korean War 1950-1953 at the Baedari Library in Pyeongtaek, Gyeonggi, Tuesday. The photo exhibit is part of South African Culture Week, which kicked off at the library on Tuesday. [PARK SANG-MOON]

The South African Embassy in Seoul and the Pyeongtaek City Government on Tuesday kicked off South African Culture Week, celebrating all things South African, including its culinary delights, pearls and his films at the Baedari library.

“South Africa is known as the Rainbow Nation because it is made up of so many diverse cultures and religions,” said Zenani Nosizwe Dlamini, South Africa’s ambassador to Korea. “Within South Africa’s borders are the Zulu, Xhosa, Pedi, Tswana, Ndebele, Khoisan, Hindus, Muslims and Africana, to name a few. All of these people are united in calling South Africa home, and as a result, their lives all contribute to being part of the country’s heritage, identity and culture.

The celebration at Pyeongtaek Library, Gyeonggi, which runs through Saturday includes a beadwork class on Wednesday, a film festival Thursday and Friday featuring the dramatic thriller “Uncovered” (2019), and a lecture on southern culture. African by Seul Jae-woo, a travel writer, Saturday. A book exhibition featuring works by South African writers such as Nobel Laureate Nadine Gordimer, whose works including “Telling Tales” (2004) have been translated into Korean, as well as a photo exhibition will be available until ‘see you Saturday.

The festival was organized by the Pyeongtaek International Exchange Foundation (PIEF) and the city government, and supported by the Embassy.

A cooking class video on the traditional South African dish potjie will be shared on PIEF’s Facebook account during Culture Week. The class was pre-filmed by Chris Truter, owner and chef of South African barbecue restaurant Braai Republic.

The embassy and city government also held a commemorative ceremony on Tuesday to mark South Africa’s participation in the 1950-53 Korean War at the soldiers’ memorial.

“This very morning, we held the commemoration ceremony,” said Jung Jang-seon, mayor of Pyeongtaek city. “It has become an annual event, but our gratitude to the South African people who came to fight for us in the Korean War never gets old. We would like to thank South Africa again with our deepest gratitude.

A total of 826 South Africans served in the war, according to the United Nations Korean War Allies Association. Together, they formed the 2nd Squadron of the South African Air Force, which was part of the 18th Fighter Bomber Wing of the US Air Force.

Thirty-six South Africans made the ultimate sacrifice during the war. Eleven are buried in the United Nations Korea Memorial Cemetery in Busan. The remains of the rest have not been found.

Photos taken of South African pilots and Air Force ground personnel during the war will be on display in the library lobby until Saturday.

“I would like to warmly thank the current and past mayors, the city council and the inhabitants of the city of Pyeongtaek for not forgetting the contribution made to the preservation of the freedom of South Korea by a handful of South Africans ago over seven decades. “said Ambassador Dlamini. 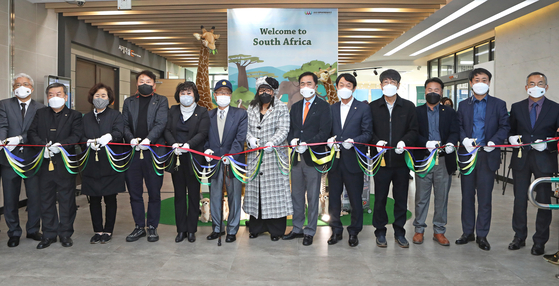 Next the release of her critically acclaimed film ‘Onidiri’ in 2018, the CEO of Yellow …